In its first day of debate on what began as a $49.7 billion spending plan for fiscal 2023, the Senate cruised through hundreds of amendments in a series of mostly voice votes. Throughout the day Tuesday, senators adopted 212 of the 1,178 amendments filed and rejected 302, and about another 90 were withdrawn by their sponsors, leaving fewer than 600 left to be considered. Republican-backed tax relief proposals are among those still pending. Most of the amendments were dispatched in two batches of bundles, in which senators adopt or reject a pile of amendments grouped together by leadership with a single "yes" or "no" vote. In their second round of bundle votes Tuesday evening, senators approved 96 amendments from across the environment, government, economic development, health and human services, and education topics, then rejected another 172 amendments from similar topics the same way. Outside of the bundle process, the Senate adopted an amendment that its sponsor, Sen. Susan Moran of Falmouth, said would shift costs of monitoring decommissioning nuclear power plants -- including the shuttered Pilgrim Nuclear Power Station -- to companies. The Senate's three roll call votes were all unanimous, approving amendments involving quarry testing requirements aimed at preventing damage to home foundations from the mineral pyrrhotite, a funding boost for the Citizenship for New Americans Program, and additional money to support a youth mental-health support text line. Before breaking until 10 a.m. on Wednesday, the Senate observed a moment of silence in memory of Americans who have died of gun violence in the past two weeks and another honoring David Stevens, the late executive director for the Massachusetts Councils on Aging.

[Coverage All Week] Senators sealed the fates of another 268 budget amendments in a matter of seconds Tuesday evening.

On the heels of a recent Brookings Institution report examining the geography of "digital food services" like grocery pickup and delivery, meal kit companies and restaurant deliveries, officials at Uber Eats say their data show consistently high demand from low-income communities in Boston.

The state's highest court ruled Tuesday that the Exxon Mobil Corporation is not entitled to the dismissal of a lawsuit that Attorney General Maura Healey brought alleging the oil and gas company misled investors about the climate change risks to its business and deceptively advertised its fossil fuel products to Massachusetts consumers.

Nurses from Brigham and Women's Hospital have ratified a new collective bargaining accord with the hospital, but are warning about worsening problems in the hospital's emergency department.

ELM Super PAC Putting $ Up For Healey, Dempsey and Campbell

A day after two of the three Democrats running for attorney general signed a pledge discouraging super PAC money in their race, the Environmental League of Massachusetts Action Fund's independent expenditure committee reported the first such spending in the contest.

Boston Public Schools continues to fall short of an "acceptable minimum standard" in several critical areas, including transportation and special education, state education officials concluded in a withering new report that could reignite debate about potential state receivership of the largest pre-K-12 district in Massachusetts.

Top Democrats who control the House and Senate are almost always more than happy to glide past deadlines or give themselves more time to make decisions. But for Gov. Charlie Baker's $700 million tax relief proposal, the Legislature on Monday took an unusual step: moving up a committee's due date.

Who’s On The Move?

... The Massachusetts Teachers Association selected its next president, who will take over in July ... Former Boston Mayor Janey will take the top job at an organization supporting people living in poverty ... Action for Boston Community Development's chief operating officer will step into the top role next month ... UMass Dartmouth turned to Texas to select its new provost ... Boston Public Schools added two graduates to its communications team ... A local communications firm has a new account executive ... Mass. Municipal brought on three more legislative analysts ... A longtime Baker administration aide is headed to the private sector ... Axios added a second reporter as it prepares to launch its Boston newsletter ...

No Impact Review For Emerson-Atrius Deal

The independent state agency formed in a health care cost control law has decided against launching a formal cost and market impact review of a private transaction affecting patients northwest of Boston.

Diehl Crowned, But Doughty Backers Say He Can Win

At Saturday's Republican Party convention, a common thread seemed to course through the comments of speakers backing the Chris Doughty-Kate Camapanale ticket for the corner office. Without mentioning him by name, those behind the Doughty-Campanale campaign seemed to be tweaking Geoff Diehl, a former state representative who has been defeated in both of his last two contested elections.

Before devoting its attention to the fiscal 2023 budget for the rest of the week, the Senate on Monday sent Gov. Charlie Baker bills establishing a women's rights history trail program and renaming Westborough's Board of Selectmen as a select board. The Senate also agreed to give a pair of committees until next Friday, June 3, to report on a dozen bills mostly involving municipal matters and veterans benefits.

The House approved an extension order that pushes the deadline for nearly every bill in the Revenue Committee -- including Gov. Charlie Baker's $700 million tax relief push -- into July. The House did not tee anything up for representatives to tackle in a formal session scheduled for Thursday. A conference committee report, filed last week, would allow undocumented immigrants to acquire Massachusetts driver's licenses and could emerge on Thursday.

Drifting from their recent moderate roots, Massachusetts Republicans on Saturday opened a new chapter in their party's history, hosting a decidedly pro-Trump nominating convention that keyed off of anger about government mandates, pledges to oppose and fight the "radical left," and calls for a state government flush with cash to deliver relief from high gas prices and soaring inflation.

The Massachusetts Senate on Tuesday launches debate on its $49.7 billion fiscal 2023 budget and senators are eager to make major changes to the bill authored by Senate budget chief Michael Rodrigues. According to a Massachusetts Taxpayers Foundation analysis, the 1,178 budget amendments filed this year have a total fiscal impact of $3.5 billion, with 60 percent of amendments earmarking funds for local projects and totaling $280 million. If history is a judge, the vast majority of those spending proposals will fail, as senators usually agree to tens of millions of added spending. Senate Democrats, who hold 37 of the branch's 40 seats, are also determined to load the spending bill (S 4) with policy proposals, which are reflected in 260 amendments. Most of those will also likely fizzle out.

Jobs Up, Unemployment Rate Down In April

The Massachusetts Senate on Tuesday launches debate on its $49.7 billion fiscal 2023 budget and senators are eager to make major changes to the bill authored by Senate budget chief Michael Rodrigues. 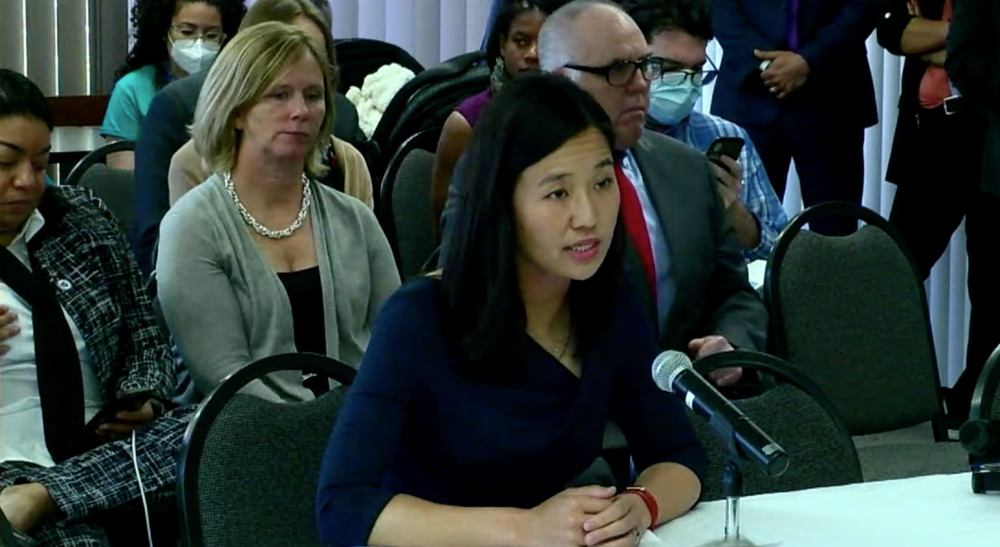 The debate about a potential state takeover of Boston Public Schools reached such a furious pitch Tuesday that a state education board meeting featured two different invocations of a higher power.

State regulators on Tuesday slapped a Springfield metal plating facility with a $10,700 penalty for environmental and hazardous waste violations.

[Coverage All Week] More than two years into the pandemic, Senate leadership has recommended that senators limit the time they spend in the Senate Chamber for the debate on a $49.7 billion state budget plan this week as a steady stream of COVID-19 exposures collides with the busiest time of the legislative calendar. 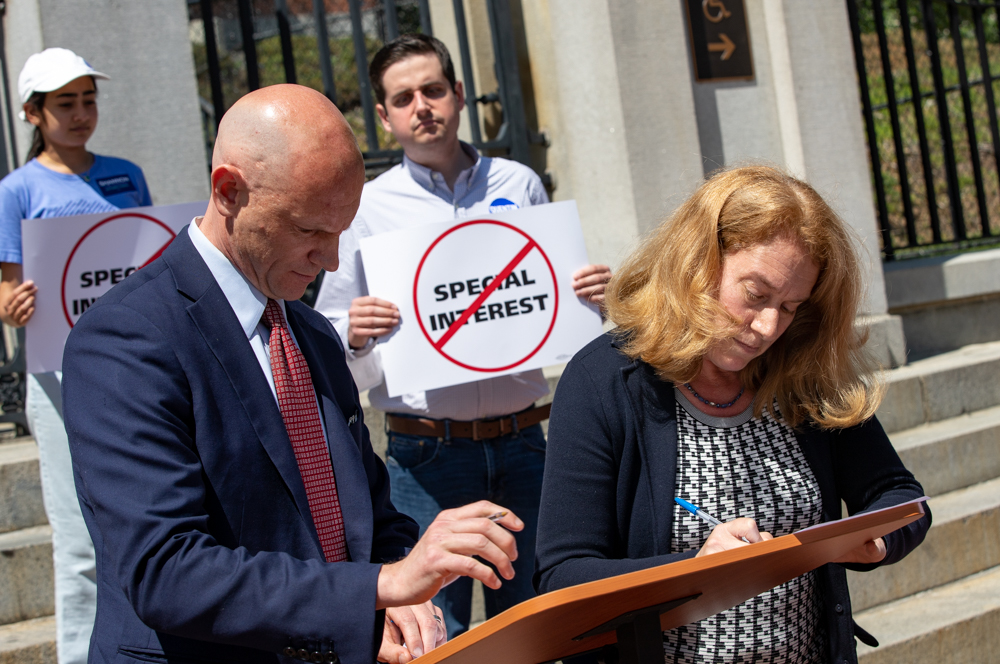 Democratic attorney general hopefuls Quentin Palfrey and Shannon Liss-Riordan on Monday signed a pledge aimed at keeping outside super PAC money out of their race, saying they hoped the move would encourage fellow candidate Andrea Campbell to do the same. 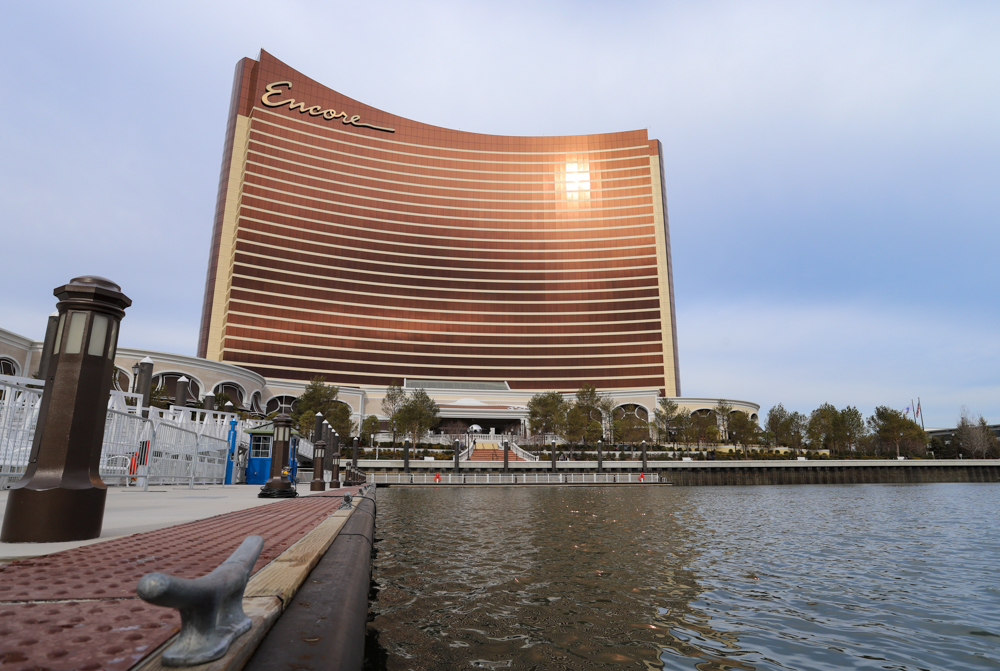 The actions of the Mass. Gaming Commission almost a decade ago could be put under a new microscope after the Supreme Judicial Court ruled Monday that a lower court should look more closely at the "highly unusual character of the commission's actions" related to the award of a casino license to Wynn Resorts and the casino company's purchase of land in Everett.

Officials in the state's hospital industry have their eye on health insurance companies' financials and are tracking growth in income and statutory net worth during the COVID-19 emergency.

Opponents of the proposed surtax on household income over $1 million launched their campaign Monday morning to defeat the Constitutional amendment on November's ballot, focusing on the potential impact on small businesses and retirees as well as the possibility that the Legislature treats the estimated $1.3 billion in annual surtax revenue as a "blank check."

Republican delegates on Saturday qualified both of their candidates for Massachusetts governor - Geoff Diehl and Chris Doughty - for the September primary ballot, and gave Diehl the party's endorsement in the race. Delegates also gave enough support to both Leah Cole Allen and Kate Campanale, the two GOP lieutenant governor candidates, to ensure them ballot access. 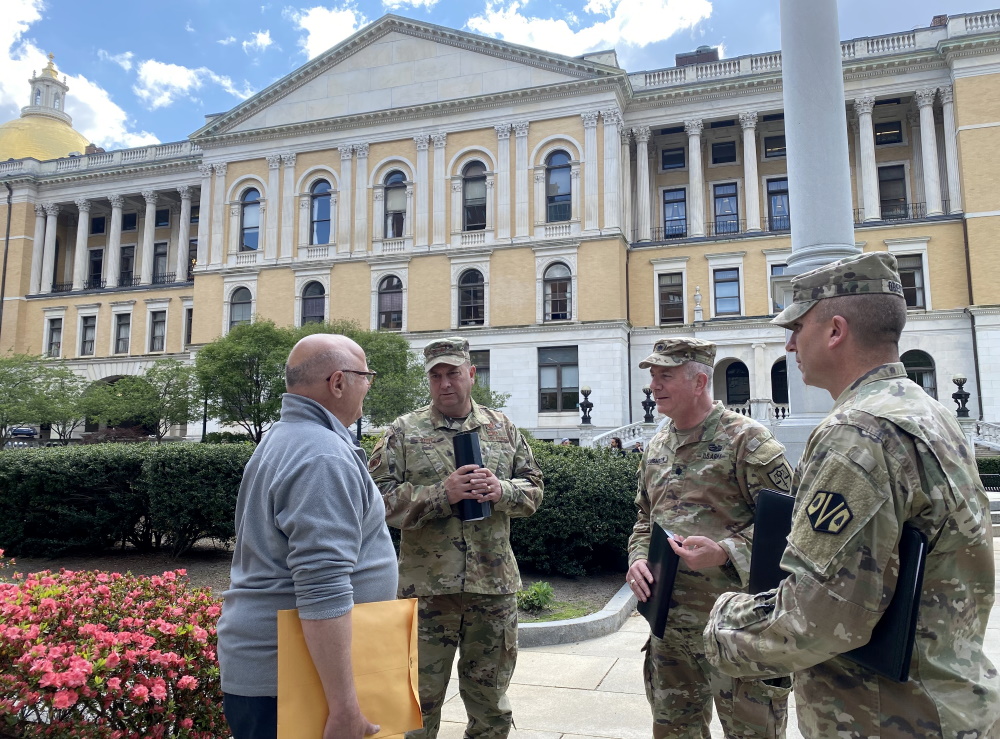 If you were wondering when the Legislature would lurch into the last leg of its two-year lawmaking session, the rapidly increasing number of bills in play is a pretty good indication that busy season has already arrived. 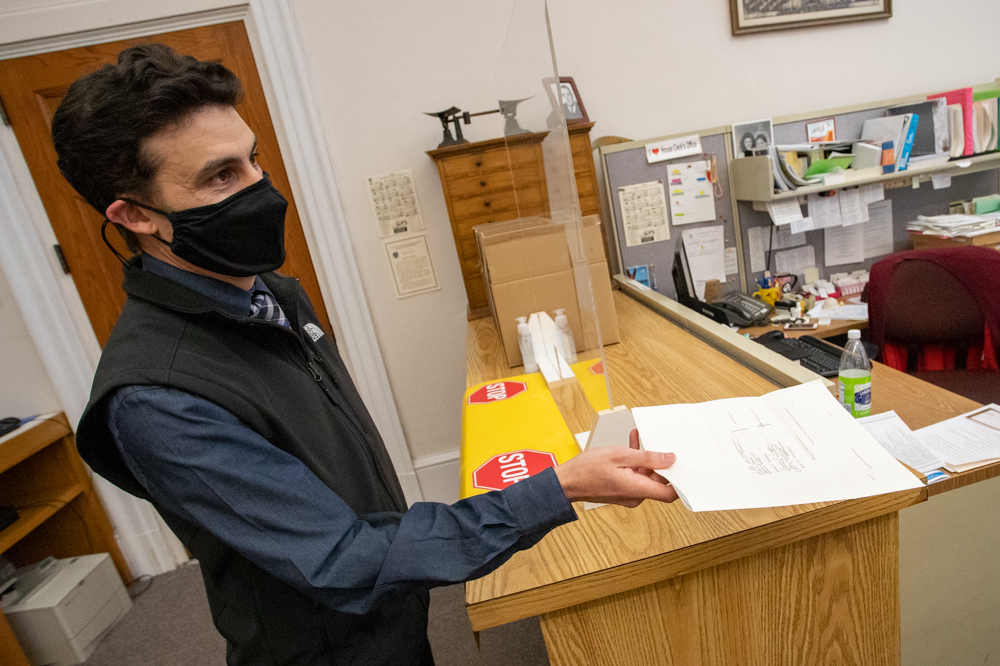 A bill that opening up access to Massachusetts driver's licenses to undocumented immigrants could reach Gov. Charlie Baker's desk as soon as next week after legislative negotiators struck a quick deal Thursday.

Who the News Service is Following

About the News Service